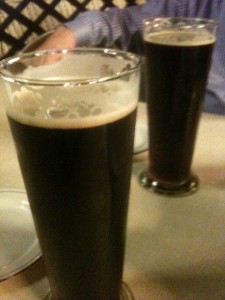 Part of the attraction of the craft beer scene is the local production. Many craft beers can only be experienced close to where they are brewed. These beers and breweries are becoming part of their local community.

It’s a question most of us could take a shot at answering based on our, um, firsthand experience with the variety of craft brews being produced in the United States. But we at We Blog Beers are genuinely interested in the answer: What truly is a craft beer?

According to the Brewers Association a craft beer is a beer that comes from a small, independent brewer that produces less than 6 million barrels a year and that has less than 25% of its ownership from a member of the alcoholic beverage industry (big beer). Also, 50% or more of its beer inventory must consist of malt beers or beers with adjuncts to enhance flavor.

Simple but fairly strict. So you big beer freaks need to stay out of this. Not that we don’t like some of your beers…they’re good, even great sometimes. But every time I walk into the local liquor store to pick up a few bottles of an interesting craft brew it pisses me off to see a big beer wanna-be craft beer standing next to my craft homeys. Get OUT! Look, I get it, it’s popular. So you want to make a little bit of money. I am fine with the craft beer industry causing you to up your game a bit. But you don’t fit in here. So listen up, store owners, do me a favor and keep the big boys away from my crafty friends.

OK, now that my rant is out of the way, let’s think for a moment about why craft beers are becoming so popular among beer drinkers, gobbling up a larger and larger market share? Let me see…let me see…a beer made with care (check), that focuses on taste and experience (check), that is not light or watered down (check). Uhhh, sign me up, please!

One reason many beer enthusiasts are salivating over the new world of craft beers is that craft brewers are all about innovation. Like a master chef, the brew master starts with his interpretation of traditional methods and ingredients and then puts a twist on it to make it unique. That interpretation and experimentation is what makes these brews distinctive and geared toward their drinking fans.

More and more local brews are becoming a sense of pride for communities, helping support travel and tourism.

Today most people live within 10 miles of a craft brewer, and if you consider yourself a beer drinker but you don’t partake of these local libations, then I’m sorry, but We Blog Beers does not consider you a beer drinker (ooooh, don’t you feel embarrassed now). But these breweries and the beers they make are bringing communities and the beer-drinking public together. They are proving to be active and appreciated in those communities. So raise your glass to some real American innovators who are bringing back the art and craft of brewing American style, which is just better, really.