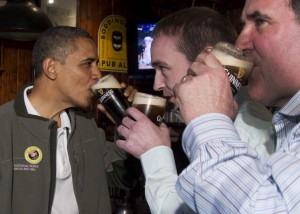 The Commander-in-Chief Gets His Beer On

I gotta be honest with you…I’m not very political. I can’t explain “Obamacare” to you. I can’t tell you if it’s good or bad. I don’t particularly like taxes, but I understand why we need them. Most of the time I can’t tell you the difference between a Boehner and a Pelosi.

But the attached photo is why I like our president. It’s not just that he’s drinking a Guinness in an Irish pub (and doesn’t care if there’s a camera nearby). It’s the fact that he CLEARLY appears to be enjoying it. Eyes closed. Head back. A little wisp of beer foam where the glass meets his face. I’ve had that look on my face before, and if you’re a beer-loving American you’ve had it too. This is clearly a man who loves his beer.

Now I know what some of you might say. It’s bad for the children to see the president drinking a beer! Couldn’t he at least drink an American beer!! And to those of you I say: SHADDAP!! I have two sons, and if they ever see this photo this is what I will tell them: sons, if you are of legal drinking age and you have the chance to drink a Guinness in an Irish pub, DO IT!!!

And I have to think that thought was going through the president’s mind as he took this drink: “I know I’m the president, and I know there’s a lot of cameras around me. And I know how this might look to some people. But when else am I going to have the opportunity to drink a Guinness in an Irish pub.”

Hail to the Chief!