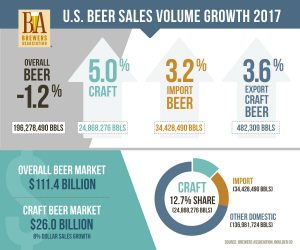 Craft brewers are still growing and not just around the waist like most of us, according to the Brewers Association (BA)—the recent 2017 end-of-year data shows increased beer tourism driven by independent craft brewers with more than 6000 breweries in operation in 2017. The trend is driving growth in beer sales as well with craft beer posting 8% dollar sale growth to $26B as a market and a 12.7% share of the market. This is almost as exciting as finding out your best friend is micro-brewing and you will soon be getting free beer!

Driving tourism and localism
Strong brewery growth in 2017, increased beer tourism and the launch of the independent craft brewer seal—with more than 2,700 craft brewers signing on.

“Craft brewers continue to grow, fueled by a passionate community dedicated to bringing innovation, jobs, and beer across America—on Main Street and beyond,” said Bart Watson, chief economist, Brewers Association. “Today, 83 percent of the population lives within 10 miles of a local brewery, meaning that the positive impact of breweries is being felt in communities all over the country.”

More fun facts about the craft brewing from our friends at CraftBeer.com: