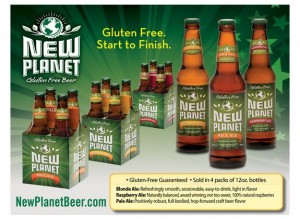 BOULDER, CO – New Planet Beer Company, the innovative pioneer of great-tasting gluten-free beers, has a new look for the New Year and launched a new website to match.

The new graphic design incorporating a green label and reverse white type boldly displaying the name New Planet creates stunning branding to ensure New Planet will stand out on the shelf and in the bar, and maintain and grow its market position as the country’s most-popular and fastest growing gluten-free beer.

“Our original packaging confused our fans.  Some knew us by New Planet, and some knew us by the actual names of the beer, like Tread Lightly Pale Ale and Off Grid Pale Ale,” said New Planet Beer Company co-founder Pedro Gonzalez.  “We didn’t want to get stuck with those names.  We are now clearly branded as New Planet so there’s no confusion.”

Each bottle has the same bold New Planet design and only the style name changes.  The company currently offers three award-winning styles: Blonde Ale, Pale Ale and Raspberry Ale. Gonzalez says the company will introduce a lot of variety, new styles and new flavors in the New Year.

To complement the packaging and its expanding market, the company has also launched a new website:www.newplanetbeer.com.   One of the most sought after features is the Beer Locator button, where consumers can simply plug in their zip code and all the accounts that carry New Planet from a one-mile to a 500-mile radius can be found.   Consumers can also find fun, great-tasting gluten-free recipes to pair with their beer, along with the company history, latest news, and marketing/promotional materials.

New Planet beers are made with all-natural gluten-free ingredients, processed with care to avoid cross contamination, and tested regularly to assure compliance.  Hence, New Planet Beer is in full compliance with federal gluten-free labeling regulations and is justly labeled and advertised as truly and purely gluten free.

“We are gluten free from start to finish and all the ingredients we use are posted clearly on the label,” said Gonzalez.

New Planet is rapidly spreading across the U.S and is now available in 42 states. The company recently expanded its production capabilities to keep pace with demand. New Planet plans to increase capacity by 50 percent in 2013 to keep up with demand for its widely popular and outrageously tasty beers.

Gluten-free beer is part of the rising gluten-free product trend. The $4.2 billion market for gluten-free foods and beverages has exploded in recent years because more consumers are discovering they are gluten intolerant. Gluten is a protein in grains like wheat, barley and rye, which are typically found in beer. Many consumers have adopted a gluten-free diet by necessity or as a conscious choice when they discover they simply feel healthier without gluten. Those struggling with common disorders such as poor digestion and inflammation are discovering that removing gluten from their diet drastically reduces their symptoms the gluten free market.

And while Gluten-free consumers and beer aficionados alike extol New Planet’s taste, they are also impressed by the extra attention to detail, care and respect for the vital importance of meticulously cleaning and sanitizing brewing and bottling equipment required to brew gluten-free beer.

Set in the heart of Colorado craft beer country, New Planet Beer Company began operations in September 2009 by introducing the first gluten-free beer brewed and bottled in Colorado.  From a humble beginning self-distributing from the back of a red pickup truck, the trailblazing company has grown with distribution to more than 42 states while winning awards and accolades for great taste.

New Planet is based in Boulder, Colo., and was founded by Pedro Gonzalez who was diagnosed with Celiac Disease in 2003.  Always a craft-beer lover, Gonzalez could not find a gluten-free brand with great taste, so he began his quest to make a great-tasting gluten-free craft beer that everyone could enjoy.