Kansas may not be one of the first states to come to mind when you think of fine craft brews, but the Kansas Craft Brewers Expo aims to change that.

The inaugural expo will be held Saturday, March 3, at Abe and Jake’s landing in Lawrence, Kansas. On the menu will be several brewers from Kansas and around the region who will be showcasing their best products. And just in case you haven’t been paying attention (and we’re betting you haven’t), Kansas is producing some damn fine brews lately.

The local heavyweight will be Boulevard Brewing (which is technically a Missouri company, but who’s keeping track. It’s beer, we’ll take whatever we can get our hands on).

Also in attendance will be local (as in Lawrence) brewers Free State Brewing Company. Free State has had a presence as a microbrewery in Lawrence since 1989, and just recently began bottling and selling in area liquor stores. Readers of this blog who have not tried Free State beer need to get their asses to a liquor store – now. Their Ad Astra Ale is not to be missed. 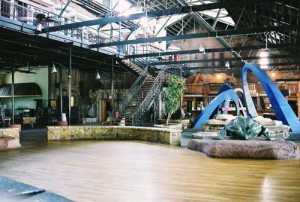 The Kansas Craft Brewers Exposition will be held Saturday March 3rd at Abe and Jake’s Landing in Lawrence, Kansas

Not to be upstaged, Manhattan, Kansas-based brewer Tallgrass will also be in attendance. Tallgrass is notable for its colorful cans (yes, cans), not to mention a stout (Buffalo Sweat) and an ale (simply called Tallgrass Ale…might wanna work on that name, guys) that will make you want to follow Dorothy to Oz, tornadoes and all. (You didn’t really think we’d do a Kansas beer post without a reference to the Wizard of Oz, did you?)

If all this hasn’t made you thirsty yet, here is a partial lineup of some of the other brewers that are scheduled to be in attendance: Schlafly (St. Louis’s second most famous brewer), Odell, Green Flash (a San Diego-based brewer that has recently begun selling in the Midwest…their Double Stout recently was ranked one of the best on the West Coast), Nebraska Brewing Company, and Kansas microbreweries Little Apple (Manhattan) and LB Brewing (Hays).

And just in case you were wondering, Weblogbeers will be at the expo to report on all the craft brewing goodness. Look forward to seeing you there.

4 Beer Bobs. It’s Kansas…there’s nothing to do here but drink anyway.