If there is one thing we like at Weblogbeers its finding ways to take things we are already doing and add craft beer to them. Every day activities are enhanced by grains and hops eating out, hangin’ with friends, or even yard work. So when we saw the list below in a post by our friends at craftbeer.com on amusement destinations that have craft breweries near by it was like a light shown through the clouds and we heard singing.

Why not! combining a great trip or a great amusement experience with a great beer. It’s adding cheese to any food, it’s just better. So sit back with the list below get your favorite locally brewed mind lubricant and dream of your next destination.

At Weblog beers we often talk about beer and how we like to add it to our lives, but we also respect the craft so we like to point out this resource on our blog  Brewers Association – Savor the Flavor Responsibly. 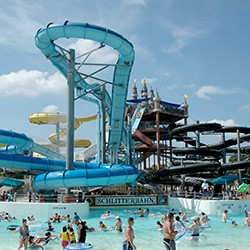 “Both start incredibly crisp, turn smooth and end with that natural Texas taste—honey and the Comal River,” says Prosapio.

Even more local is Faust Brewing Company, which also happens to be a hotel. Originally built in 1929, the historic hotel is only a mile away from Schiltterbahn. With a handful of guest taps and six year-round offerings, Faust Brewing is the perfect vacation from your vacation! 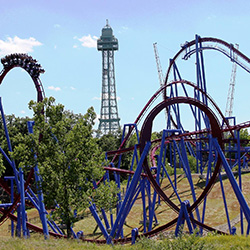 Located just outside of Cincinnati along the Little Miami River, King’s Island has long been regarded as one of the best amusement parks in the country, often credited with reviving worldwide interest in the roller coaster industry. But they don’t just take their rides seriously. Now they’re paying attention to the local craft beer industry.

In April 2013, King’s Island announced they would be opening the Christian Moerlein Bier Garten in the coming season. Thrill seekers can now enjoy a full-service bar from the Cincinnati brewery with no shortage of Morelein brews.

Pair a ride on The Beast, the longest wooden roller coaster in the world, with Christian Morelein’s Dopplebock. The brew’s full body and smoothness harken back to Germany’s Reinheitsgebot Purity Law. A classic brew for a classic ride.

Cedar Point’s accolades line up like a hall of fame athlete. Most notable is their 16 consecutive years of being heralded as “Best Amusement Park in the World” by Amusement Today. Naturally, you can find some pretty fantastic craft beers nearby.

Great Lakes Brewing Company in Cleveland (60 miles east) is the crown jewel of Northeast Ohio brewing. But you already knew that, so try something new and even closer to the park at Catawba Island Brewing Company in Port Clinton on the other side of Sandusky Bay. Their Couple Three Hops IPA is a solid choice after taking on Millennium Force—one of the tallest and fastest coasters in the world.

Florida is a mecca of theme parks. Since it might feel a bit weird to go hunting for craft beer alongside a life-sized version of Mickey Mouse, we decided to go with Busch Gardens (now owned by the Blackstone Group). This park is surrounded by a healthy selection of craft breweries in the greater Tampa Bay area.

Of particular note is Cigar City Brewing, which The American Craft Beer Cookbook author John Holl calls a “major attraction for those who appreciate and seek out excellent beer” in a state known for theme parks.

Founded in 1959, Busch Gardens has a unique mixture of zoo attractions and rides, including their newest roller coaster Cheetah Hunt, a triple launch coaster that comes in at 4,400 feet long—the park’s longest thrill ride. Visiting Florida in the summer can be quite a steamy experience, and Cigar City’s Hotter Than Helles Lager is a perfect match for the sunny weather. This beer has a malty backbone with notes of hay and honey that are balanced by noble hops and a refreshing finish.

One of the benefits of being in a massive metropolitan area like Los Angeles is that you’re likely never too far away from a brewery. Long Beach, Huntington Beach and Anaheim all have a handful of breweries to check out after a day at Knott’s Berry Farm.

“One of Knott’s Berry Farm’s most famous attractions is GhostRider,” says Arevalo. “Looming 118 feet over historic Ghost Town, GhostRider is the largest attraction in park history—the ‘big whig’ of coasters on the West Coast.”

A perfect complement to this behemoth of a ride is Noble Ale Works’ Big Whig IPA. True to the name, Big Whig clocks in 6.8 percent ABV. This beer is loaded with citrus flavors (tangerine), and a powerful resinous finish typical of a West Coast style IPA.

With an initial drop of 108 feet, GhostRider is one of the tallest wooden roller coasters in the world. Riders will reach top speads of 58 miles an hour during the two-minute ride of twists, drops and turns.