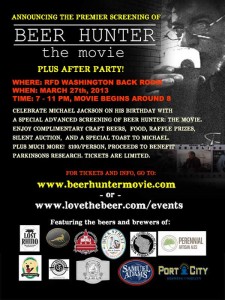 The premiere is scheduled for March 27 at RFD Washington. A limited number of tickets ($100 for VIP, $30 general admission) are available to purchase on the movie’s official website.

Attendees will enjoy five special complimentary craft beers, discounts on all other beer, beer-centric food all evening, and a custom logo glass commemorating the event.

Born on Kickstarter and fully financed by Jackson fans, Beer Hunter: The Movie captures the genius, warmth, and passion of the man who gave rise to America’s microbrewery movement and transformed the world of beer.

A legend in the world of craft brewing, Michael Jackson made his mark as a leading beer expert with his 1977 book, The World Guide to Beer—the first to categorize almost every major style of beer in the world. It was his 1993 television series, The Beer Hunter, however, that became an instant classic, and helped launch the spectacular craft beer movement that we know today. Jackson was also a regular contributor to All About Beer Magazine.

Jackson’s sudden death in 2007, at the age of 65, shocked the beer world, leaving a lasting void.

Gifted with three year’s worth of irreplaceable footage from his travels throughout Europe and the United States with Jackson—during which they shot clips for the Rare Beer Club—filmmaker J.R. Richards decided to embark on the making of this commemorative documentary.

Beer Hunter: The Movie presents an intimate reflection of Jackson as he travels to beer meccas around the globe, giving insight to his enigmatic personality, remarkable contributions to beer and whiskey, and his secret struggle with Parkinson’s Disease.

Proceeds from the event will benefit the Michael J. Fox foundation for Parkinson’s research, and the Michael Jackson Beer Education scholarship fund. This event marks the first year of what will become an annual fundraising event in Jackson’s honor.