Beerjobber is more than a website it’s a community of beer drinkers who love the art and craft of beer. Sign up and not only do you get access to the beers online but frequent emails come to your inbox about the best deals on craft beers from around the U.S.,

Those of us at WeBlogBeers have to admit we like anything that gives us easier access to craft beer. So it is with great joy that we present to you  Beerjobber a website which allows you to get fresh beer without having to leave the house. (yes we know you can thank us later)

This is how it works: Users go to beerjobber.com and use a login and password to browse the company’s selection of beers. The beers they choose are then packaged and sent to any address in the U.S.  The site also allows users to rate beers and it recommends beers based on the user’s profile and previous selections.

Beerjobber is the brainchild of Sean Nevins, who was looking for a way to get his mouth on beer that had not been sitting for weeks between the brewery and the retailer. “The Irish have long been known as beer lovers, stemming from their ability to drink fresh beer, straight from local breweries. Unfortunately, before shipping beers stateside, well-known brands in Europe add preservatives that compromise the original, intended flavors,” said Sean Nevins, President of Beerjobber. “Our mission at Beerjobber is to bring fresh, all natural, preservative-free beer directly to our fellow beer lovers, the way the brewers intended and the way the Irish enjoy it.”

Browse unique craft beers from across the United States, see reviews, rate your favorites and order from the comfort of your desktop 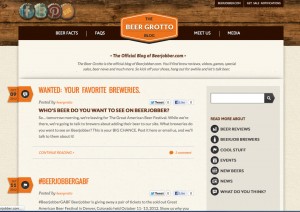 One of the most recent addtions is a blog that helps you understand craft beer choices.

Now the rub a case of 12 22-oz. bombers can run between $70 and $100. (yeah, we think that’s a lot of money) And Beerjobber cannot ship everywhere due to legal restrictions. But a tool on the website allows users to plug in their ZIP code to find out whether Beerjobber can ship to their state. But for beer drinkers looking for adventurous brews and beers they cannot get off the shelf or at the local brew pub, this is a high but acceptable price to pay for fresh craft beer. Weblogbeers suggests get a buddy or two and share the cost, 12/3 is 4 pints a piece and as we know from previous posts, two pints a week keeps you health and well. Prost! and thanks Beerjobber you are a beer drinkers friend.

4 Beer Bobs, Excuse us while we whip this out! Our credit card that is, what did you think we meant?